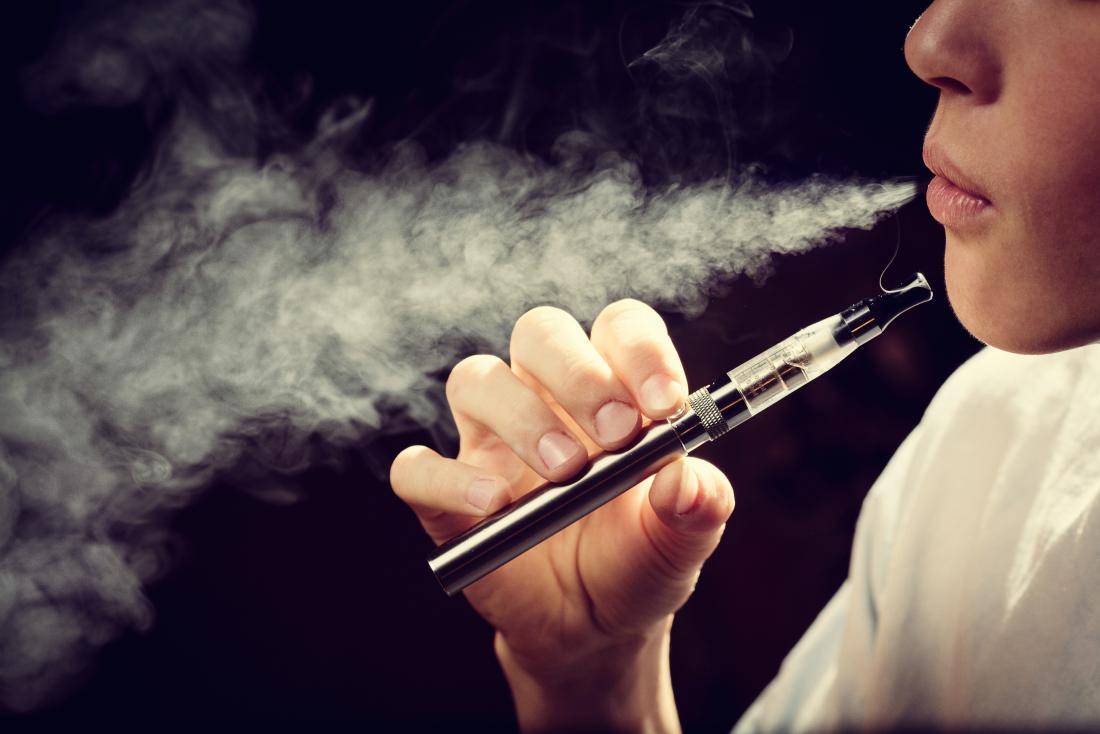 People have been smoking marijuana and drinking marijuana tea for thousands of years. The herb offers a wide range of medicinal and recreational benefits. In recent years a new way of getting the benefits marijuana offers has been devised. It’s called vaping. Scientific research and anecdotal evidence suggests vaping may be a safer and more effective way to use marijuana. Some people say it makes them cough less when they use a vaporizer with their marijuana. Others say vaping gives them a more intense high. Researchers say vaping marijuana also has less negative side effects.

Considered a very healthy way to use marijuana, vaping uses a much lower temperature to heat and release the cannabinoids and terpenes in marijuana without combusting the herb. The technology behind vaping creates vapor rather than smoke and does not create harmful byproducts. This method of consuming marijuana doesn’t create toxins which can disturb the respiratory system. Vaping produces a smokeless steam that is much gentler to inhale while producing the same results as smoking marijuana. A variety of unique, easy to use vaping devices are used to create the mind-altering vapor.

Many people say the physical effects of vaping marijuana create a slightly different experience. The high from vaping is said to be milder and only requires about three or four hits to deliver the desired result. Some say vaping marijuana produces a high that’s similar to drinking wine. Vaping doesn’t overwhelm you and knock you down the way smoking does. Instead it produces a mellow feeling that people enjoy more than smoking a joint or hitting a bong. Vaping seems to help people better enjoy the potency of marijuana than when smoking it. Many say it creates a much better experience.

Some people prefer vaping because it enables them to use marijuana in different forms. With vaping, it possible to use marijuana oil and concentrate in addition to the dried herb. This delivers different physical effects for users. Vaping marijuana in any form also increases the amount of THC released by as much as 80% and produces 60% more CBD. This enables people to get better results from the marijuana they use whether it is the marijuana oil, concentrates or the dried herb. For many people that is reason enough to switch from smoking to vaping. They get more from the experience of using the herb. It’s easy to find a marijuana dispensary with many vaping devices.

Over the past 30 years, a number of studies have been done on the benefits of vaping marijuana as opposed to smoking it. These studies looked at the chemicals vaporizers produced and compared them to those from smoking marijuana. Beginning with tests done in the 1980s through 2014, the results have been consistent. Vaping, which heats the marijuana at between 185 and 195 degrees rather than burning it, reduced the amount of tar released by 79%, did not produce a detectable amount of carbon monoxide, produced one polycyclic aromatic hydrocarbon, a toxic chemical, and one cannabinoid. Smoking marijuana, on the other hand, produced 6 polycyclic aromatic hydrocarbons, more than 111 other dangerous components and lots of carbon monoxide.

A 6,900 participant self report study conducted in 2007 also showed more positive results for vaping marijuana over smoking. The study participants were asked how often they experienced respiratory symptoms like shortness of breath, coughing and wheezing. Overall, the study found that people who vaped their marijuana experienced negative respiratory symptoms about 60% less often than people who smoked marijuana in joints, bongs and other methods. That’s a significant difference. And many people said those respiratory issues were a major reason they switched from smoking to vaping.

Clinical studies conducted over the past 10 years have provided more insight into the difference in lung capacity between people using vaporizers to consume marijuana and those who smoke it. Lab-based clinical studies conducting tests using spirometry found that most people who used vaporizers had better lung capacity than those who smoked marijuana. Further, the maximum lung capacity of people who switched from smoking weed to using vaporizers for a month improved significantly for more than 60% of the test subjects. The researchers concluded switching from smoking to vaping potentially offered important benefits for marijuana users.

Dangers Of Marijuana Oil And Concentrates For Vapers

Chemicals In Some Vaporizers

Another concern that’s raised about using vaporizers is when people visit a weed dispensary they may have access to models that contain potentially dangerous chemicals. vegetable glycerin, propylene glycol, medium chain triglycerides and polyethylene glycol are used in some vaping devices. Research done on these chemical show when they are heated to 230 °C, the vapor they produce contains traces of acrolein, formaldehyde and acetaldehyde. However, vaping devices for dry herb use electric power and are never as hot as 230 °C. So the danger is only theoretical. There’s a Seattle dispensary that can provide safe vaping devices.

The authors of the ‘ideal harm-reduction approach’ review concluded that for marijuana users trying to avoid pulmonary problems, vaporizers show promise. The reviewers noted that vaping reduces the amount of respiratory exposure people have to the toxic particulates present in marijuana smoke. They point out this reduces the harm to lung health that’s clinically evident with smoking marijuana. The evidence suggests vaping marijuana rather than smoking it is less likely to lead to health problems because users are exposed to fewer toxins than combustion releases.

Smoking marijuana releases many cancer-causing compounds and produces soot that enters the lungs. Research on the benefits of vaporizing marijuana revealed smoking marijuana is harsh on the body because it isn’t filtered. Vaping, on the other hand, creates a fine mist vapor by heating the marijuana flowers. Vape pens are employed to heat marijuana oils and extracts and create calming, mind-altering effects. There are many other types of vaporizers that can be found in any good marijuana dispensary.

Several studies suggest it’s healthier to vaporize marijuana than smoke it. Some researchers hold that vaping marijuana is more effective for use as medication. It helps prevent respiratory irritation while reducing the symptoms of asthma. Patients reported they were less likely to cough up phlegm when treating their illnesses by vaping. Many said there was a stark improvement in the results from their treatments. Many also preferred the improved taste vaping provided.

In New York where medical marijuana was recently legalized, lawmakers only approved vaping marijuana because it doesn’t undercut the anti-smoking campaigns the state promotes. Plus, they feel it helps to enable law enforcement to distinguish between legal medical marijuana users and people using pot illegally. However, there are concerns about unintended consequences of promoting vaping medical marijuana. The concern is there isn’t enough research on the long-term impact and the physiology of vaping. Plus, marijuana users appear to rapidly develop tolerance to marijuana’s active compounds when they vape the herb.

One of the challenges medical marijuana users face is trying to control their dosage. Vaporizing marijuana intensifies the effect of the herb and makes it easier for them to control their dosage of THC. Vaping enables patients to consume only a small amount of marijuana and get the result they desire. When patients smoke their medicinal marijuana, they use more to get the same results from their treatment. Vaping enables patients to make their medical marijuana last a lot long longer. A good dispensary can provide a specific amount of marijuana in disposable cartridges. This ensures patients get a properly measured dose.

A Variety Of Vaping Devices

Many people visit a well-known Seattle dispensary to access their wide selection of vaping devices. This Seattle dispensary offers several types of vaping pens and other unique vaping devices that makes consuming medical and recreational marijuana safer and easier. These vaporizers are gadgets that heat the marijuana to the correct temperature needed to extract the most therapeutically useful elements of the herb. Once the marijuana is heated, breathing in the vapor is fast and easy and quickly alleviates the stress and pain with which many people suffer. Often all it takes is a few puffs.

Vaping marijuana offers several advantage over smoking it. Those benefits include:

Unlike smoking, vaping releases marijuana’s dynamic compounds in a more accessible breathable form. When patients use a vaporizer, not only do they prevent the discharge of the toxic compounds marijuana contains, it also activates a higher percentage of the cannabinoids in marijuana than smoking it. Patients looking to get maximum efficiency from the use of medical marijuana have found that using a vaporizer is the best way to do so. Vaping helps marijuana to more quickly and effectively shield nerve cells, impact the patient’s state of mind and improve the quality of their sleep.

Patients regularly report vaping medical marijuana treats disease, pain and other medical issues more successfully than smoking. Using marijuana vaporizers is a more effective approach for avoiding the wide range of side effects with which people suffer. People also find their attempts at sedating the agony in which they often find themselves is faster and easier when the use a marijuana vaporizer. In recent years, a steadily growing number of medical marijuana patients have stated a preference for using a vaporizer to deliver their medicine. A recent CBC News Health Affairs study found using a vaporizer led to an 11% reduction in the number of marijuana doses patients needed annually because of vaping’s excellent therapeutic potency compared to smoking.

Marijuana is known all around the world for its distinctive pungent odor when it is being smoked. Many people who want and need to use marijuana are often hesitant to do so because anyone who visits their home or stands close to them after they have just smoked marijuana will know their secret. For people who want to be discrete with their use of marijuana, vaping offers an effective solution. Vaping devices keep marijuana from producing a loud smell when it is being used. This enables many professionals who use medicinal marijuana to take their medication without anyone being aware of that they just did.

Many people can find unique, compact, convenient to use, technologically advanced vaporizers to vape cannabis at a marijuana dispensary in their community. In addition to vaporizers, some of the common materials available at a good dispensary include:

Vaping cannabis is growing by leaps and bounds among both medicinal and recreational marijuana users. In 2014, Oxford Dictionary chose Vape as their word of the year. Today’s young adults have grown up vaping and appreciate how much safer and better it is to vape marijuana rather than smoking it.

Is Vaping Marijuana Safe? Here’s What the Evidence Says

Vaping vs. smoking pot: What’s safer, and does the high feel the same?