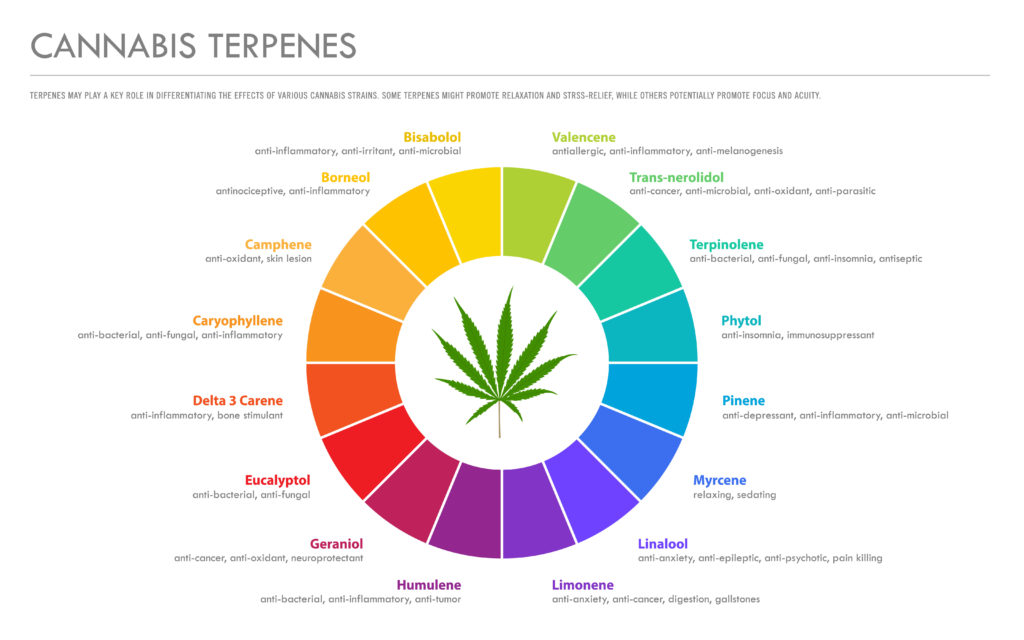 Many people appreciate their favorite cannabis strains, not just for the high but for the flavors and aromas that emanate from a good hit. There are certain adjectives that people use to describe the specific scents associated with cannabis like piney, citrus, peppery, and floral. There are others as well, and all of these scents are a result of terpenes in cannabis. Well, what the heck are terpenes? In chemistry, terpenes are volatile organic compounds or simple molecules that are produced in plants and animals that tend to be highly aromatic. They play a key role in what’s called the Entourage effect, which is described as the synergistic interaction between compounds found in a plant that have medicinal or therapeutic properties, like those terpenes. Meaning, that in plants like cannabis, it’s not just the THC that’s contributing to your high, it’s other compounds, too, like those terpenes. Many common terpenes found in cannabis include Myrcene (the most common terpene, found in approximately over 20% of modern commercial cannabis strains according to Leafly), Caryophyllene, Limonene, Linalool, and Pinene, but there are many, many more.

The terpenes that we know and love found in cannabis are not unique to the plant itself but are in fact found in a number of other plants that are often used for therapeutic purposes as well. These plants include cloves, lavender, citrus fruits, chamomile, and others. Many of these terpenes are highly associated with a specific effect produced by the plant. Linalool, for instance, is found in lavender and is known for encouraging a sedating, anti-anxiety effect that lavender is often used for in aromatherapy. Pinene (truly, alpha- and beta-pinene) is found in pine trees, and acts as a bronchodilator which helps relax and open airways, which is one of the reasons why breathing deeply in pine forests feels so good.

Getting to know what terpenes are in your favorite cannabis strains might help point you in the right direction of some new favorites or help you with a desired effect. There will be variation in percentages of terpenes in your strains, but online resources can be used as approximations if your favorite farms don’t test the terpene contents.

Top 8 Strains for the Avid Hiker

Marijuana Basics: How to Use a Cannabis Tincture for Wellness

Cannabis and Self-Care: What Are the Best Strains for Anxiety and Sleep?