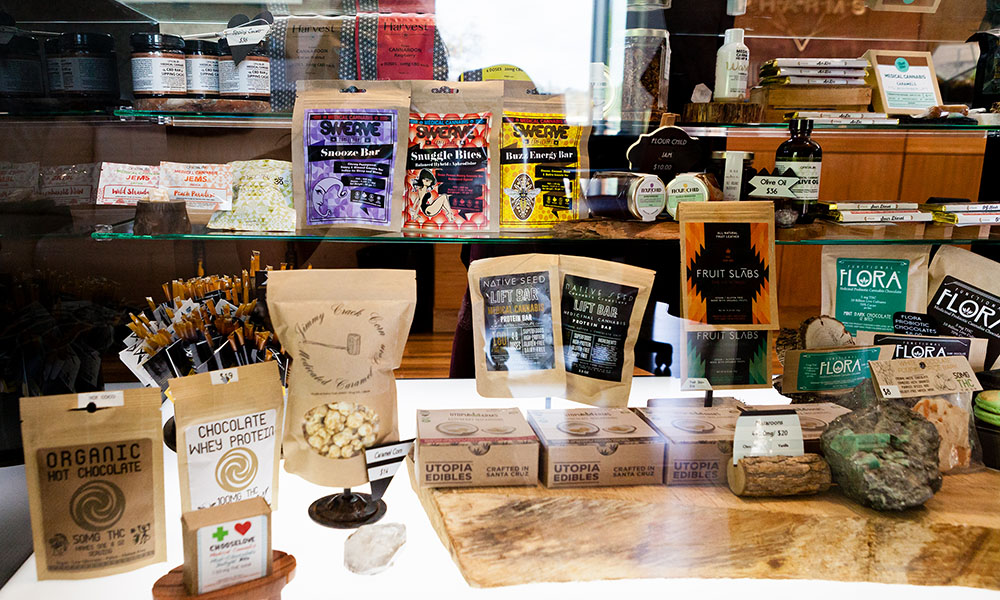 Best Cannabis Products in Washington State
While the state of Washington is known for its epic scenery and the Space Needle; Washington is also known for their spectacular selection of “trees.” Washington set an example for other states to follow when it became the first state to legalize marijuana for recreational use in 2012. The surge of the marijuana industry has boosted the state of Washington to a “higher” standard. Many superb companies have emerged to the forefront with their tasty products of concentrates, edibles and flowers. The 365 Recreational Cannabis dispensary is one of the best in the state when it comes to high quality potency and flavor. Below I have listed the best of the best products and companies that can be found at the dispensary.

Phat Panda Flower- Phat Panda doesn’t disappoint when it comes to high quality products, especially flowers. The unlimited selection of strains that Panda promotes are truly insane. Taste tingling strains such as Candyland, Platinum Girl Scout Cookies and Gelato are sure to leave your palette wanting more. Their complete selection of Indica, Sativa and Hybrid strains must be seen in order to be believed. The extra frosty trichomes on strains like God’s Gift, Cherry Pie and Bubba Kush can only be classified as connoisseur worthy. For those that are into OG Kush, Phat Panda has you covered. Get an experience of a lifetime by trying the noteworthy strains of Yeti OG, Ghost OG or the trippy Panda OG. If you’re feeling very adventurous, Phat Panda also has an offering of exotics such as Golden Pineapple, Urkel Haze and Double OG Sour Diesel.

NWCS Edibles- The edible game will never be the same after the release of NWCS’s new edible menu. Made in the state of Washington, NWCS edibles reach the peak of the flavor profile. The Chewee’s are one of a kind to say the least. Infused with both Indica and Sativa blends, the bite sized pieces of caramel come in the three classic flavors of original, caramel apple and sea salt. The fun doesn’t stop there, other fruit flavored treats such as Hi-Burst live up to their name. The small fruit infused squares are not only unique, they are also very potent. Take you pick of berries n’ cream, orange cream sickle or the wild and racy pineapple orange. NWCS didn’t forget about all the chocolate lovers out there, they also have fudgy brownie bites and sugary cookies in the flavors of snickerdoodle and chocolate chip. Live the high life and experience what NWCS Edibles really have to offer.

Doc Croc Flower- Doc Croc is yet another company from Washington state making an impact in the industry. They pride themselves on producing some of the best hydroponic flower on the market. With the tagline of “Born in Australia, Grown in Washington, USA”, you know the experience is out of this world. They feature different strains that are available in 1g to 28g. Their fiery pre-rolls are also worth bringing up. They are stuffed with at least 1g of high-grade hydroponic flowers. Other products such as concentrated shatter, wax and BHO may also be available.

Gold Leaf Flower- Golden Leaf flowers are the next level of superiority in high-grade, potent flowers. Not only do the flowers make a statement, so do the packages. The visually stimulating packaging draws its motivation from the roots of Hawaii. They are best known for their one of a kind Leira Cannagars. The pure elegance of the Leira Cannagars will leave you speechless. It takes more than a month to complete “1” cigar as they are all hand rolled. Collector pay top notch prices for the beautiful luxury speciems. They have been featured on main mainstream media outlets such as Forbes and CNN. Get a taste of the good life and treat yourself to a Leira Cannagar. One hit from the Leira Cannagar and you’ll no longer be “sleepless in Seattle.”

Ionic Cartridges- The Ionic Cartridges company makes small batches of oils and concentrates. Not only are these products some of the best in Washington, they are also categorized by moods. Ionic offers three different mood cartridges known as social, relax and focus. Social is infused with hybrids, Relax has big hints of Indica while Focus is packed full of Sativa. Their specialty vaporizer pen comes with flavored THC oil. The oil is a “pure” distillate. The Dab Wax applicator offered by Ionic brings new meaning to the term “higher than a kite.” Take a dab from the wax applicator if you dare, as it’s not once, not twice but triple distilled.

Oleum Concentrates- The award-winning Oleum Concentrates aims to be the top dog when it comes to potent concentrates. Their Wizard Stones won the 2017 and 2018 Dope Cup award for being the most potent. As if that wasn’t enough to take a sample, their live resin is also made with fresh frozen flowers instead of dried. Other products such as the Honey Crystal are fully dewaxed to project a great potency upon inhale. For those that are pre-roll lovers, they have you covered as well. The Sugar Cone is an infused pre-roll which has flowers mixed with sugar resin. You read that right, SUGAR RESIN. Don’t sleep on the explosive products from Oleum.

Sticky Budz Honeycomb Wax- Speaking of Dope Cup winners, the Honeycomb Wax by Sticky Budz received an award in 2017 for best BHO Honeycomb. The beautifully perfected, versatile wax can be dabbed, rolled in a joint and be put in a vape pen. Be on the lookout for the soon to be released Premium extract in the Seattle area.

Evergreen Herbal Edibles- Let’s be honest, Evergreen Herbal Edibles produces some of the most powerful edibles on the market. The 4.20 Bar Minis are “highly” sought after in Washington and can be found at the 365 Recreational Cannabis dispensary. With a potency of 10mg per Mini, the sweet morsels of goodness pack a heavy punch and kick. Minis are available in the flavors of dark chocolate hazelnut, milk chocolate hemp crunch and milk chocolate toffee. Various packs of the Minis also have CBD infused. They are widely known as “The best known high-potency chocolate on the West Coast.” With a statement such as that, you defiantly have to try it for yourself. If the world of chocolate isn’t your thing, they also have a Sinners & Saints brand of hard candy. The flavors of blue raspberry, butterscotch, grape and strawberry have up to 100mg of THC per bag. They also have varieties of the candy that are infused with CBD.

How to Find the Best Marijuana Dispensary Near You

How to Balance Cannabis Use with Alcohol Use